This swimming star remains 1 of Australia’s most recognised Olympians

Making her debut for the Australian Swimming Team at the 1994 Commonwealth Games, Brooke went on to represent Australia over 25 times at major international championships.

In 2004 Brooke climbed her Everest, when, after missing two Olympic teams in 1996 & 2000, she won her Olympic gold & silver medals in Athens.  Brooke’s was one of the real success stories of 2004, hearing her name read out on the Olympic team after winning 3 gold & 1 silver medal in front of a packed hometown crowd at the Olympic Trials.

...& she has not looked back since. After winning silver in the 100m breaststroke & gold as a member of the 4x100m medley relay team, Brooke went from strength to strength.  Creating history at the 2004 FINA World Short Course Championships in Indianapolis where she won a record 6 gold medals – 5 individual plus the 4x100m medley relay in world record time. 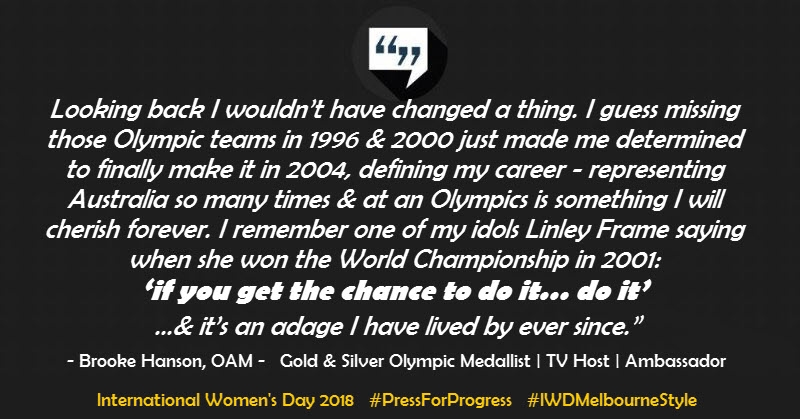 After 13 years on the Australian swimming team, Brooke joined the motivational speaking circuit & her’s is a story to behold – giving a behind the scenes insight of a young woman’s journey to reach her Olympic dream.

Since her retirement from competitive swimming Brooke released her autobiography “When Silver Is Gold” The Brooke Hanson Story - she loves nothing more than to share her inspirational story with those she meets.  It took a decade of dogged perseverance, including twice narrowly missing Olympic selection & suffering physical & personal setbacks, before she finally achieved her dream.

Honest, sometimes controversial & inspiring – in the book, Brooke details how she nearly drowned twice as a toddler; takes the reader through the regime of Olympic training plus the obstacles she dealt with outside of the pool... Brooke tells of the scandals in the sport where “baseless lies” almost cost careers: that famous Medley muddle; drugs in sport:  suffering an electric shock– winning & losing – & why she eventually retired.

Her television presenting on the TV Week Logie winning show “What’s Good for You” earned her a Logie nomination for Best New Female Talent.

Brooke has gone on to enjoy a successful career for herself as a television host, product ambassador & continues to balance her blooming professional media career with, motherhood, sponsorship appearances, motivational speaking, charity events, swim clinics & her commitment to promoting a healthy & active lifestyle for all Australians.

A tumultuous year was to follow Brooke's World record successed in 2007, with the joy of her wedding to long time partner & fellow swimmer Jared Clarke followed by her near tragic electric shock mid-year.

Brooke announced her retirement from competitive swimming in late 2007, released her autobiography ‘When Silver Is Gold’ in 2008 & still continues to promote healthy active living while working in the media, for her sponsors, corporate partners & various charity groups.

After a 9-month battle in the NICU Jack passed away in April 2012. In the end Jack’s severe chronic lung disease along with pulmonary hypertension, all became too much for his little body to bear. Despite his amazing strength, he lost his fight for life after suffering a cardiac arrest.

Despite their grief Brooke & Jared appeared on 60minutes, sharing their story with Australia. They wanted to help other families by talking about their loss, their journey, the love they had for Jack & the importance of “family”  The couple, along with their children, together continue to bring a greater awareness to the birth of premature babies in memory of their son & brother Jack.

After an emotionally tough 3 years the family were thrilled with the arrival of their third child, another boy Billy Mills Clarke in November 2013. Loving parenthood Brooke & Jared were excited to give their sons a baby sister, with Matilda Brooke Clarke born in August 2015. After 3 boys, Matilda was a real surprise to the family who felt so fortunate to bring healthy babies into the world after the death of Jack.